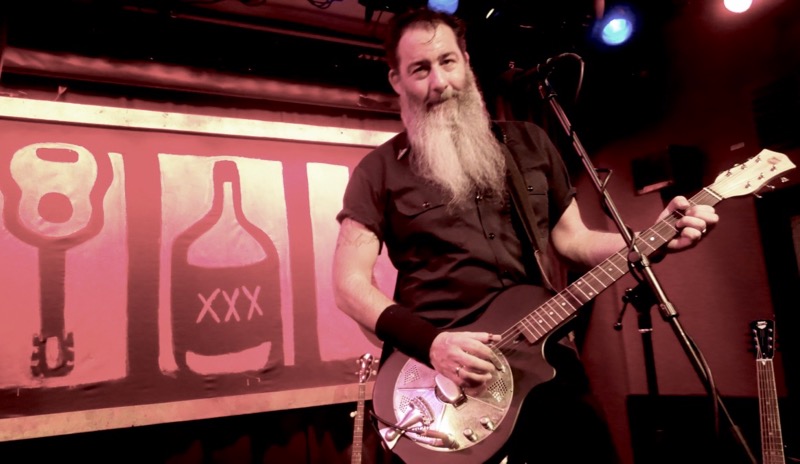 WE have a fairly lazy morning getting packed and checking out the hotel then we meet JJ for breakfast at Bob’s on Sheridan.

The food is amazing. Margaret has a fairly regular breakfast, JJ a Philly steak omelette and I have a breakfast burrito as big as my head. Must’ve used a tea towel-sized tortilla to wrap it!

There’s 260 miles to go to Winona and we’ve told Ken we’d be with him between 4pm and 5pm. Ken is our pal Charlie Parr’s father-in-law and he’s kindly put us up every time we’ve come through Winona, the first time being back in 2013 when Charlie and I played a show there together.

There’s time for a quick chat before we head downtown to Ed’s and load in. Venue manager Nate and soundman Camden are real for us and soundcheck goes great. There’s no support band so I plan on playing two 45-minute sets,

We nip along the road to a wee Mexican place called Cha Chi’s and enjoy tacos and quesadillas before making our way back to the venue,

The town is dead..there’s a few folks come into the venue but its hardly busy, Turns out there’s a big music festival on today/tonight less than a mile away…which makes me wonder why the booker asked if we could swap from the originally planned Friday (last night) to tonight (Saturday).

It’s nice to see the handful fo folks who are in for the music, but its a hard show to play and we’re pretty disappointed…we’ve always done really well here and kinda feel a bit duped into swapping dates. Not just because of the poor turnout (and door money!) but because the change in routing has added 1000 miles to our trip and  countless hours driving back and forth.

We do pretty well on merch considering the poor turnout tho’.

Soon we’re packed up and back at Ken;s for a large dram and a catchup….it’s after 2am when we realise the time and decide to head for bed.