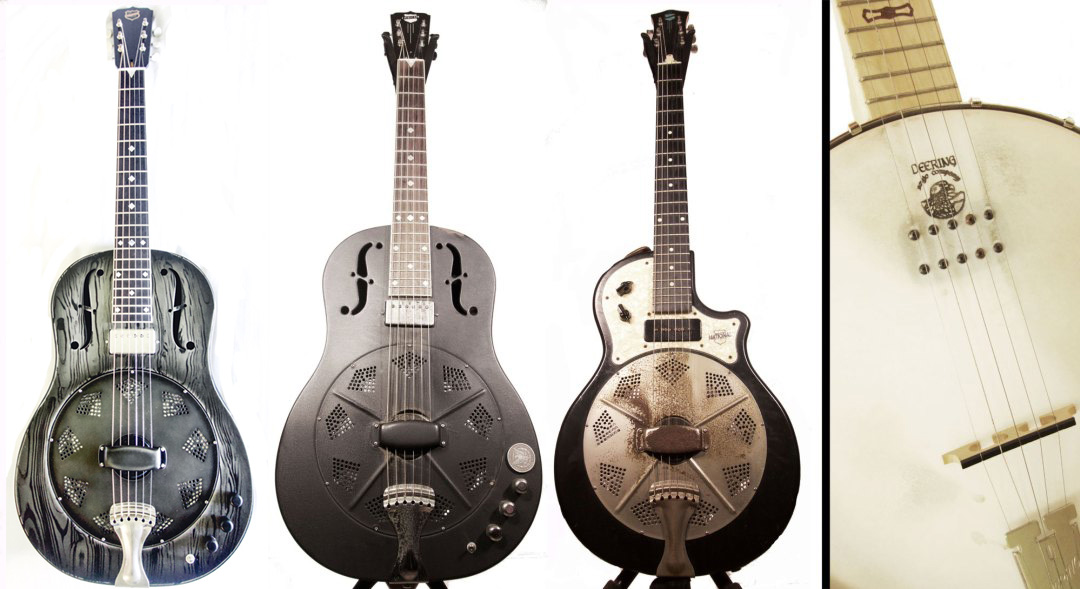 FOR touring in the UK and when travelling by car Dave uses three National Reso-Phonic guitars and a Deering Goodtime banjo all DI’d via a Fractal Systems AX8 pedalboard. Here’s the lowdown…

The two metal bodied resonators are custom made by National – one is the ‘Dave Arcari signature’ model (open D tuning) – see here for full spec and info. This guitar replaced a custom nickel plated bell brass Style O (open C tuning)…the signature model guitar has heralded a move from open C to open D tuning and lighter strings (on this guitar only) as the instrument is set up so, if necessary, Dave can play his entire set (including regular tuning, non-slide material) on this guitar. The move to open D means there’s less variation on cone pressure between open D, standard, and open G tunings – the lighter strings make for a better tone on the non-slide, standard tuning songs.

The other main guitar is a a steel-bodied Delphi (the ‘black guitar’ in open G tuning).

Both have M2 necks with flat headstocks rather than slots as Dave uses heavy strings and any replacement following a broken string on stage needs to be dealt with quickly…the flat headstocks make it easier and quicker to replace a heavy gauge string.

Both guitars have similar custom pick up systems. Dave never liked the external power boxes for the Highlander piezo pickups. Not only were they something else to carry about and/or lose –  he left many behind on dark stages – but they require a stereo cable and are incompatible with wireless systems. In addition, Dave wanted a magnetic pickup option for the songs on which he uses overdrive. A piezo/acoustic pick sounds horrible through overdrive/distortion!

National put together a system with onboard (the guitar) power for the Higlander piezo in the biscuit bridge, a Lollar Imperial magnetic humbucker pickup in the neck position and a blend/switch system. This is featured on both of Dave’s metal-bodied guitars. The signature model guitar has a metal battery box fabricated into the body of the instrument to overcome shortcomings in the usual plastic battery compartments.

Dave is proud to be part of Reunion Blues‘ official artist family and uses Continental Voyager gig bags to keep his instruments safe while touring the UK, Europe, Scandinavia and the USA. You can see his testimonial video here.

For regular tuning songs in his set Dave usually uses a National ResoLectric Jnr (no longer made…current equivalent is the Resotone) with a single P90 in the neck position. For acoustic shows and on some other shows he uses a Collings 0002H instead of the ResoLectric. Regular tuning guitars are strung with Newtone Nickel Masters.

The banjo used both live and in the studio is a Deering Goodtime 5-string banjo – tuned to open G – with a Kavanjo head which has a built in humbucker pickup behind the skin. The sound is remarkably natural. \

When travelling to the USA Dave can only take his two main metal-bodied National guitars. So, in storage in New York, he has a Gold Tone 5-string banjo (which he got from pal and fellow musician Charlie Parr) with K&K Twin pickup and a National ResoTone solid body resonator for regular tuning work.

All instruments are DI’d via Dave’s pedalboard case custom made by Condor Cases to (a) fit within airline hand baggage size restrictions and (b) to keep weight under airlines’ common 10kg limit including the pedals inside. 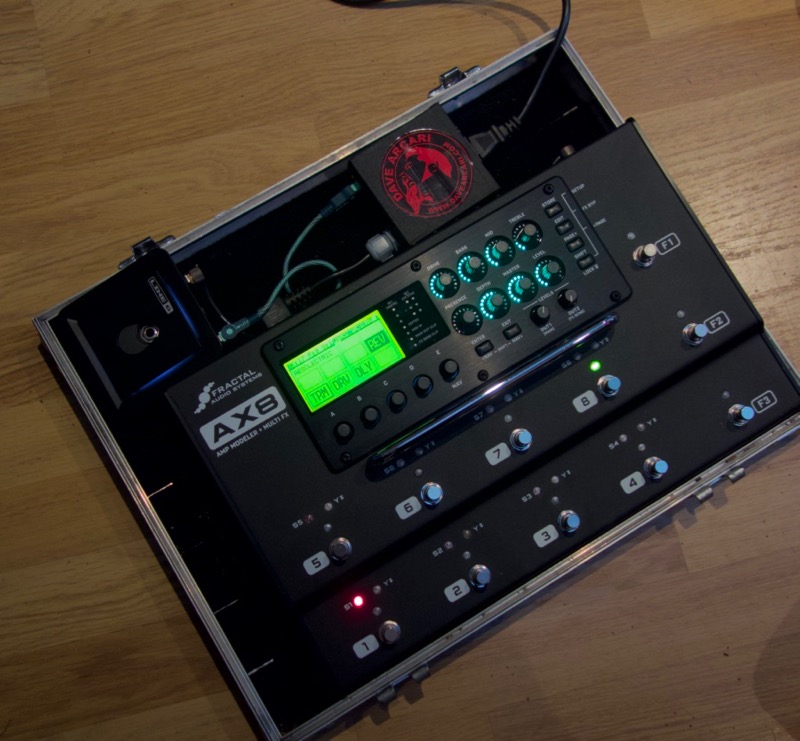 Dave’s pedlaboard case was updated in March 2018 (see below for the old pedalboard/case contents)...a much simpler and lighter case set up contains a Fractal Systems AX8 amp profiler and multi effects unit and a Line 6 Relay wireless system with a custom made power distribution box.

While Dave was happy with his previous set up, the power requirements of the Damage Control pedal and the subsequent need for a huge, heavy power supply was a drawback…and the need for an even bigger and heavier additional transformer when touring in the USA. Also, a lack of space in the case meant he couldn’t add any further effects like tremelo or reverb,

With little or nothing to choose between sound quality,Fractal’s all-in-one floor unit gave it the edge over Kemper’s unusual form factor and need for an external footswitch/controller. The AX8 also fitted in Dave’s existing case.

Dave designed a power distributor (built by an local electrician pal) to avoid the need for extra power cables and adaptors, so the whole shebang just need one IEC ‘kettle’ lead for power…oh, and it’s all mutli-voltage, so the bulky, heavy transformers are not needed in the USA 😉

For ‘plugged but acoustic’ shows, Dave uses a single Ear Trumpet (Myrtle) mic on stage which pick up instrument, voice and footstomp.

The previous incarnation of the pedalboard/case – see pic opposite – contained…

Damage Control Liquid Blues dual valve overdrive pedal with two stages of overdrive. This is how Dave managed to get a decent overdrive sound when DI’d straight into the PA without using a guitar amp. The only drawback is that it requires a whopping 2amps of AC power. Sadly it’s no longer made. Luckily Dave has a backup!

T C Electroniocs Polytune2 – this replaces a string of Boss tuners that only ever seemed to last a year or so. The Polytune is smaller and saves space in the case, features direct bypass and is more accurate that the Boss.

Line 6 Relay G50 wireless receiver. Constant lead breaking, no matter how good the leads were, led Dave to investigate wireless. All the systems, no matter how high end, he tried out worked fine on overdrive/electric sounds, but seemed to compress and ‘kill’ acoustic tone….until he found the Line 6 digital system. Not a fan of Line 6 or digital gear in the past, he was surprised to find the perfect solution for his wireless needs!

Boss DD3 digital delay. Used solely for slapback effects. Overkill, but his beloved £20 FabTones proved unreliable and not up to the rigours of the road, even in a bombproof case.

Circuit Innovations custom power supply. No over the counter power supplies offered the 2 amps of AC required by the Liguid Blues pedal….some of the more expensive ones went up to 1 amp. The rest of the gear runs on 9v DV. Although big and heavy, this specially made power supply ticks all the boxes for Dave.

On stage Dave also uses a Wazinator minbi kick for foot stomps on a occasional tracks. It’s small, light, no batteries and makes a heck of a thud. Importantly, the ‘tongue’ that acts as the trigger is flat and thin, so it’s much more comfortable to use standing up. Other stompboxes (and indeed Wazinator models) are wedge-shaped or raised which is fine for performers sitting down, but cramp inducing for those who stand up.

Inter-pedal connections are via Lava Cable Piston solder-free cables – the low-profile, right-angled jacks let pedals sit closer together on the pedalboard. There’s also a wee box with spare batteries for my radio beltpack transmitter and a wee clock – which along with all the valves and cables int he case, causes chaos when going throuhh the x-ray at airports!

Studio equipment is Mac-based and includes a Euphonix desk, Avid/Digidesign ProTools rack and a range of mics, DI boxes.

DAVE IS AN OFFICAL ENDORSEE OF